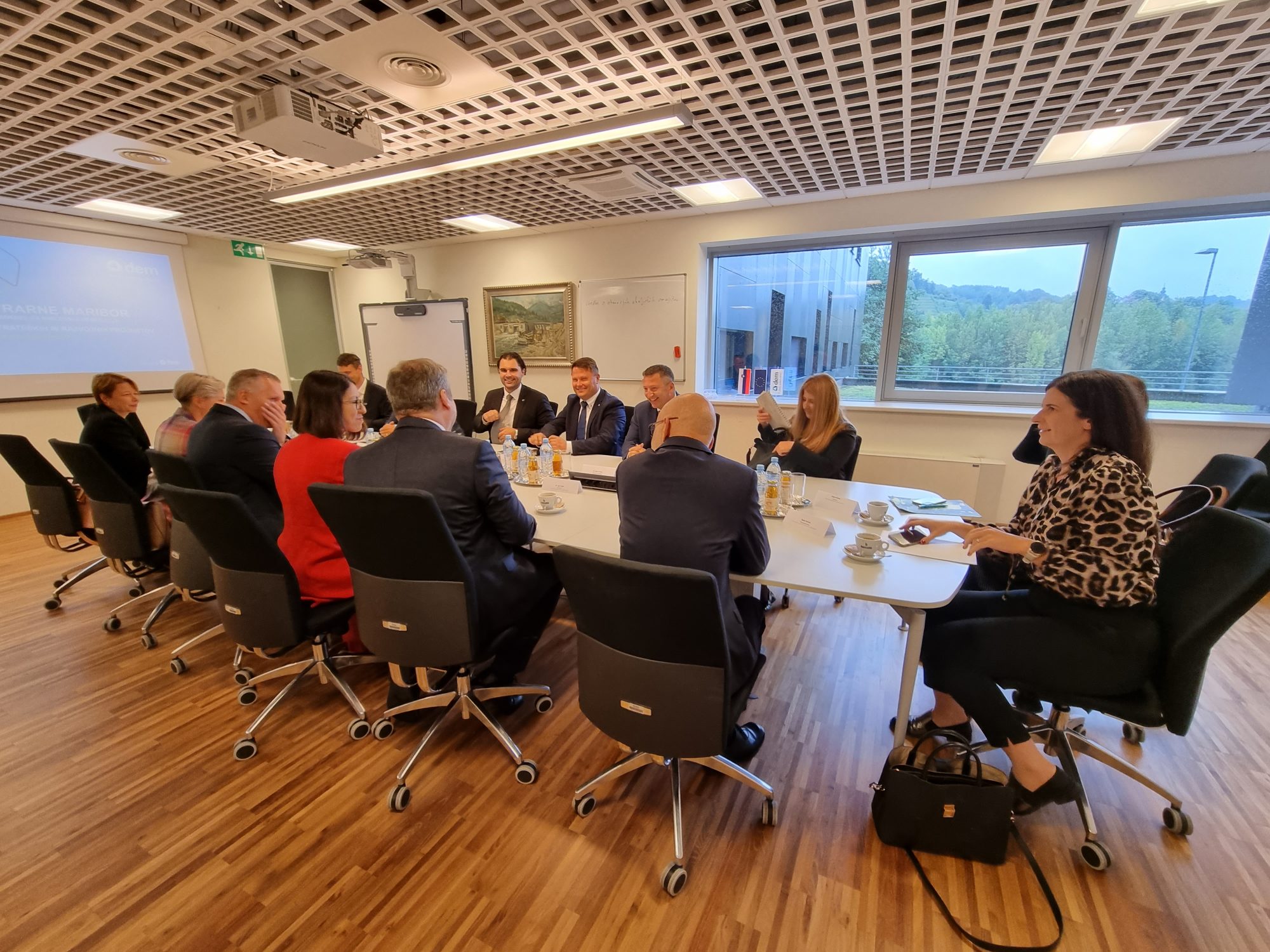 The company Drava Power Plants Maribor (DEM), the largest producer of electricity from renewable sources in the country, which operates as part of the HSE Group, was visited today by Emilija Stojmenova Duh, Ph.D., the Minister of Digital Transformation of the Office of the Government of the Republic of Slovenia, Bojan Kumer, M.Sc., the Minister of Infrastructure, and Igor Papič, Ph.D., the Minister of Education, Science and Sports. The guests were received by both members of the DEM management, Aleksander Brunčko, General Manager, Damjan Seme, M.Sc., Manager, and Viktor Vračar, Ph.D., Managing Director of HSE.

The main purpose of the meeting was the presentation of implementation and strategic development projects of the Drava Power Plants Maribor. Among the implementation projects, the renovation of the Markovci Dam and the reconstruction of the youngest hydro power plant on the Slovenian part of the Drava River – the Formin Hydro Power Plant – stand out. Other important projects include the rehabilitation of the vibration condition of generators and the renovation of secondary systems on existing production units. Among the important development projects of the company, there was talk of setting up solar power plants on the inlet and drainage channels of the Zlatoličje and Formin Hydro Power Plants with a total capacity of 30 MW, and the setting up of three wind parks – Ojstrica WF, Rogatec WF and Paški Kozjak WF in the area of ​​north-eastern Slovenia. The activities taking place in the project of the Kozjak pumped-storage hydro power plant and in the project of installing electricity storage facilities to reduce production deviations of the HSE Group were presented. Research into the exploitation of the potential of geothermal energy for generating electricity was also mentioned, for which the implementation of a pilot project using a dry well is planned already this year, while potential locations for the installation of geothermal power plants of the binary system are still being studied. Those present also exchanged views on the possibilities of cooperation between the Drava Power Plants Maribor and research infrastructures in the field of digitisation of science. Cooperation would present new possibilities for the further development of information infrastructure in scientific research and educational organisations in the country, as well as new possibilities for cooperation between the economy and science.

The representatives of all three ministries and the Drava Power Plants Maribor also signed a Letter of Intent for strengthening cooperation in the field of knowledge transfer and the search for synergistic infrastructural effects between the public sector and the economy.

Aleksander Brunčko, General Manager of DEM said: “Safe and reliable production of electricity from existing power plants and keeping them in top condition remains an important guideline for our society. However, if we want to follow the commitments of the state and our own directions and goals regarding the increase in the production of electricity from renewable sources, we must additionally engage in the procedures of siting and put all our efforts into the realisation of strategic development projects. The space, knowledge and available electricity enable us to also participate in the realisation of projects in the field of further development of research infrastructures.”

Damjan Seme, M.Sc., Manager of DEM added: “We are in the period of many large and small investments, which we plan to realise in the coming years. Our goal is to increase the total power of the Drava Power Plants Maribor from the current 600 MW to 750 MW by 2026, with the construction of new production units, and thus significantly increase the proportion of electricity production from renewable sources.”

Viktor Vračar, Ph.D., Managing Director of HSE: “Hydro power plants operating under the umbrella of the Drava Power Plants Maribor produce the most environmentally friendly electricity in Slovenia and are certainly the most important company of the HSE Group from this point of view. All our development plans are aimed at ensuring a quick and efficient transition to a carbon-free society. The Drava Power Plants Maribor will play an extremely important role in this field, as according to plans, as early as the second half of this decade, they could increase the installed power of their power plants by about a quarter and consequently increase the production of electricity from renewable sources. In the entire HSE Group, we have several projects in preparation or construction for the utilisation of water, solar, wind and geothermal energy. In the field of responsible production of electricity, which will ensure a cleaner future for posterity, we remain the leader in Slovenia.”

Igor Papič, Ph.D., the Minister of Education, Science and Sports, provided a timely reminder at the meeting of the importance of cooperation between business and science. “In order for Slovenia as a society to be able to face increasing risks more effectively, we must ensure that scientific research as a horizontal activity is actively connected to all social subsystems, especially the economy. In this light, we must also look for opportunities for synergies that will enable sustainable and environmentally friendly energy and digitisation. The research community must be open in relation to the economy both with the results of the research activity and with the research infrastructure.”

Emilija Stojmenova Duh, Ph.D., the Minister of Digital Transformation of the Office of the Government of the Republic of Slovenia: “In a digital society, data represents national wealth and raw material, which is of key importance to digital transformation. Therefore, I see the data centre on Maribor Island as an important building block for the further development of information systems both in Slovenian scientific research and educational organisations. Natural resources are by no means negligible at this location. The Drava River, which will contribute to the cooling of the supercomputer; the building, which will be built from Drava sediments; and the utilisation of waste thermal energy for heating residential buildings in Maribor, represent an excellent example of a circular economy, i.e. they connect digital and green development.”

Bojan Kumer, M.Sc., the Minister of Infrastructure: “Green and, above all, reliable production of electricity from renewable sources is of key importance for the development and green breakthrough of Slovenia. That is why we must look for synergies in the field of information and communication technologies, infrastructure and digitisation. We need joint projects, transfer of knowledge and integration of the economy with public research organisations and infrastructure institutes.”

The working meeting was concluded with a tour of the Management Centre of the Drava Power Plants Maribor.