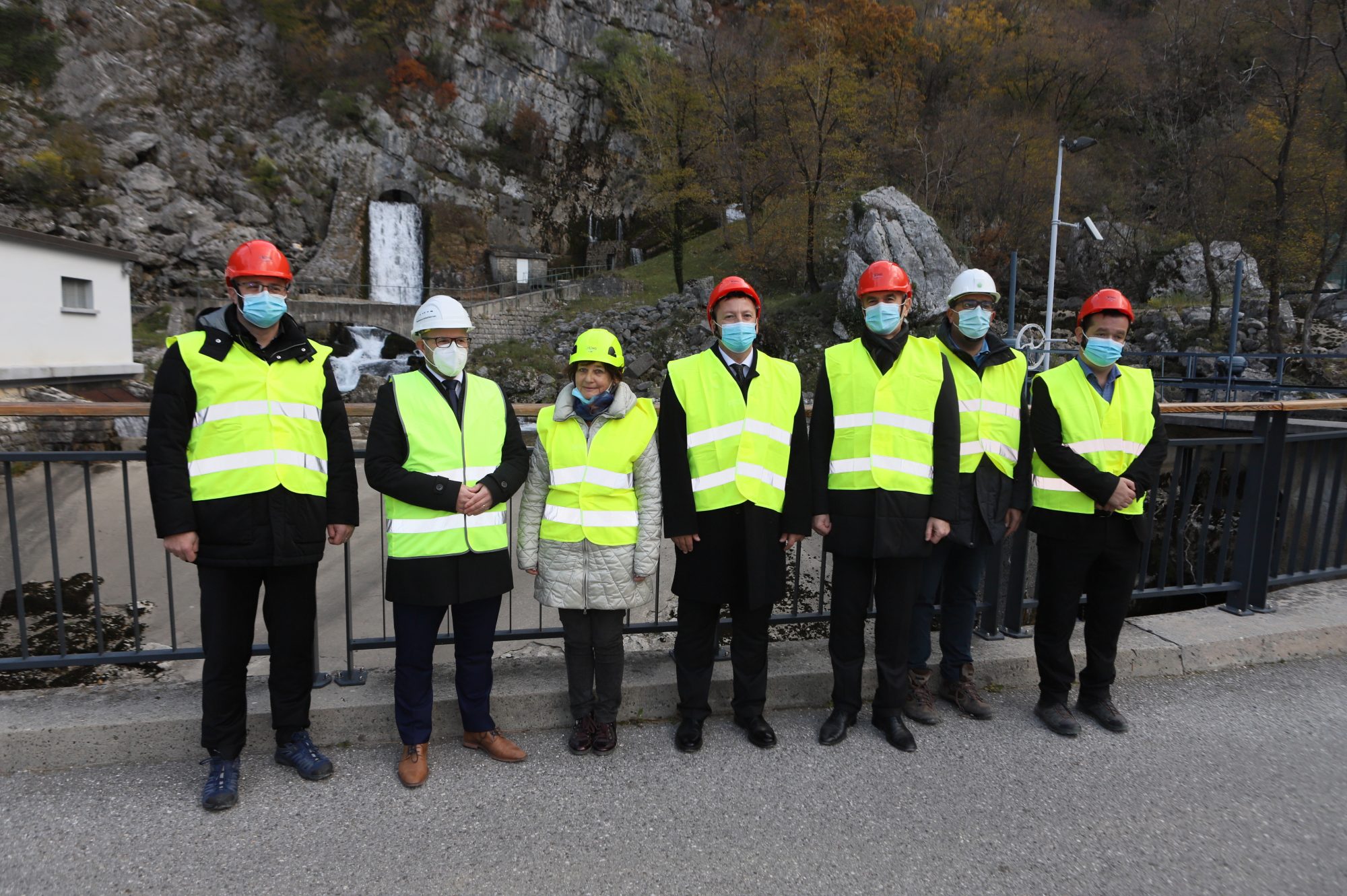 On Wednesday, 17 November 2021, Minister of Infrastructure Jernej Vrtovec paid a working visit to the reconstruction site of the Hubelj Hydro Power Plant, currently the largest investment of the company Soške Elektrarne Nova Gorica (SENG). It is an investment worth EUR 4 million euros, which according to the director of the company Radovan Jereb is of “exceptional importance for the local community, as it will bring a new route of the pressure pipeline, while the work needs to be implemented due to landslides and the consequences of landslides, especially on the existing pipeline and other facilities and due to wear and tear of the equipment.”

Viktor Vračar, the chief executive officer of Holding Slovenske Elektrarne (HSE), of which Soške Elektrarne is a part, emphasised that the holding, which in 2020 produced as much as 88% of the total electricity produced from renewable sources in Slovenia, was investing in green technologies at a facilitated pace. In addition to hydro power plants, the largest solar power plant in the country, Prapretno, will be connected to the energy network in the coming months, the company Dravske Elektrarne is expanding its solar fields, and new investment is also under way at SENG. According to Vračar, the Hubelj Hydro Power Plant also became a solar power plant in 2020, when solar panels were installed on the roof of the engine room.

Uroš Podobnik, a member of the management board of HSE in charge of hydro power and the president of the supervisory board of SENG, emphasised the importance of synergies between energy facilities and the local environment. The Hubelj Hydro Power Plant, which is located in the centre of Ajdovščina and which celebrates 90 years of operation this year, is an example of preservation of the rich technical heritage and siting of facilities in the environment. “The Hubelj River water source not only supplies the Hubelj small hydro power plant, but is also the most important source of drinking water for the Ajdovščina area and its surroundings. These are the good practices nurtured by SENG, which looks for other positive effects to develop activities and infrastructure that raise people’s quality of life in close cooperation with the local environment.”

The investment is also welcomed in the local community, with the mayor of the municipality of Ajdovščina Tadej Beočanin saying: “We are happy and proud that SENG has decided to reconstruct the Hubelj Hydro Power Plant, which represents an important part of our heritage and identity. Cooperation with SENG is at an enviable level, the investment took into account the needs and limitations of the local environment, for which I am grateful, of course. I am convinced that a future based on tradition is precisely the right direction for the local environment, which we follow in all areas of development.”

Throughout history, the Hubelj provided power to the water wheels of many mills, sawmills and ironworks, and later to the water turbines that replaced water wheels. With the creation of power stations, it became the driving force of the new facilities that produced electricity for homes and industrial plants. After ninety years of operation, the Hubelj small hydro power plant, which has been producing electricity from a renewable water source since 1931, will undergo a complete renovation that will include the replacement of the steel pressure pipeline and hydro-mechanical equipment, renovation of the supply channel and inflow facility and rearrangement of the spillway. In the engine room building, new generator equipment with an excitation system and a newly installed fire alarm system will be installed, and the remaining electrical hardware will be replaced. The reconstruction will extend the lifespan of the power plant, increase electricity production and improve the energy efficiency of the power plant, said Jereb.

Near the picturesque source of the Hubelj, where the water for the hydro power plant is captured and which is also a tourist attraction, Minister Vrtovec and his team inspected the progress of work on the new route of the pressure pipeline, where landslides are most pronounced. It is precisely due to landslides that a new route was determined in accordance with geological analyses. This runs east of the existing one and has proven to be the most stable. As landslides are still expected after the reconstruction of the pipeline, a unique innovative concept of flexible supports has been designed that enables the pipeline to be adjusted during operation. The tops of the sliding concrete supports will be equipped with special adjustable steel bearings, which will, in accordance with the planned technical observation, move and adjust to compensate for deformations of the foundation floors. The technical observation of the pipeline, which will continue after the reconstruction, will ensure that the curvature of the pipeline does not exceed the limit static values, thereby contributing greatly to the stability and safety of the renovated pipeline.