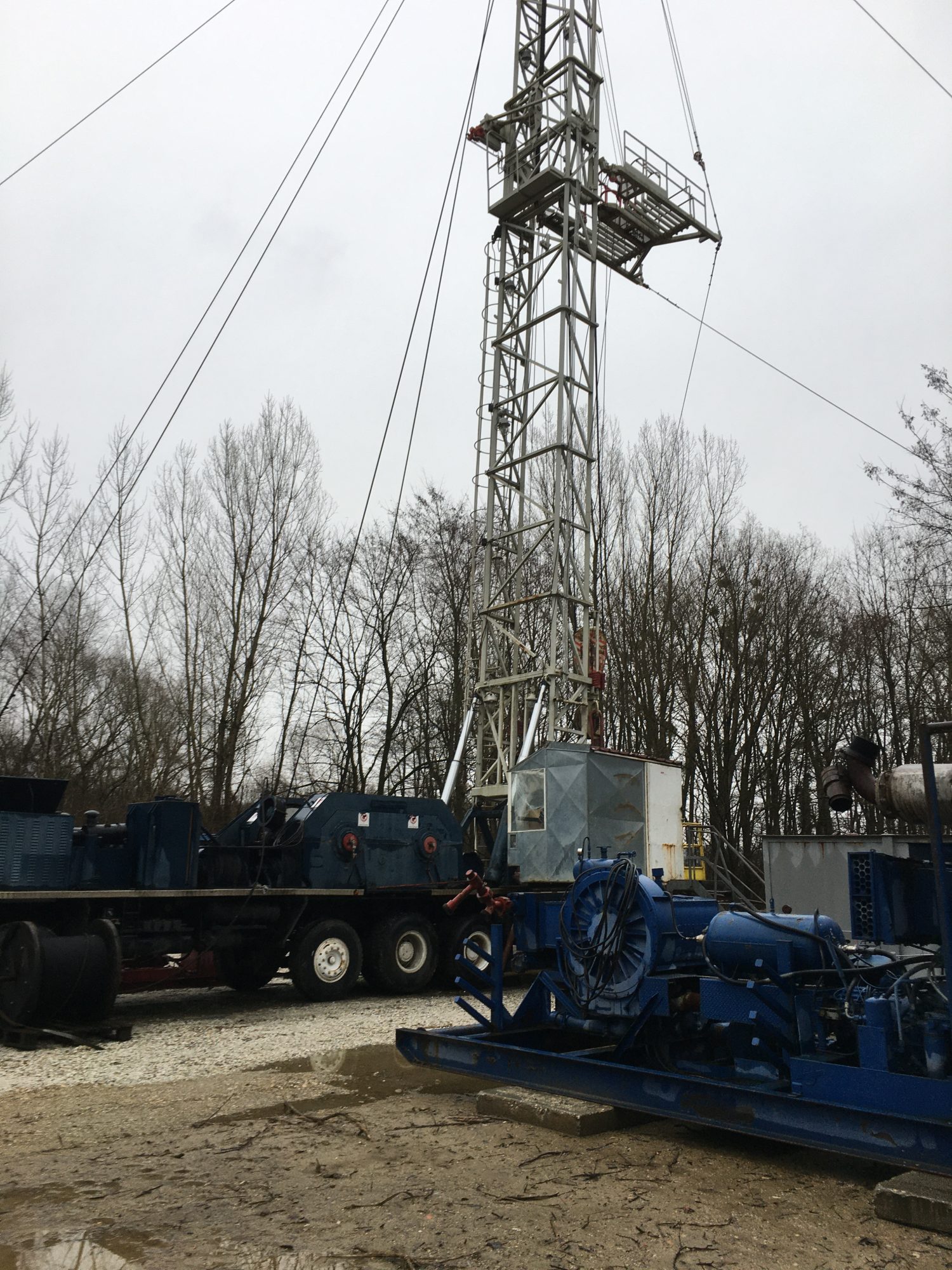 In December, the company Petrol Geo started underground construction work on the abandoned well Pg-8 for the needs of the Čentiba pilot geothermal power plant, for which the Drava Power Plants Maribor – a company in the HSE Group – received a building permit in May last year. The keynote speaker at today’s official start of underground construction work was Dr. Aleksander Jevšek, Minister for Development and European Cohesion Policy.

The pilot geothermal power plant in the village of Čentiba in the Municipality of Lendava will utilise the geothermal energy potential of the existing dry, non-productive well which is approximately three thousand metres long. It is a completely closed system, where the liquid coolant (ammonia) will not come into contact with the overheated rock. The Pg-8 well is cased (steel lining of the well) and cemented, and as such completely sealed. The geothermal power plant at the Pg-8 well will consist of an underground part, i.e. of the geothermal gravity heat pipe, and the above-ground part, i.e. cooling system and engine room.

The underground works include the removal of the existing pipes, for which a special elevator with additional equipment has been mobilised, with which the current installations will be extracted. This will be followed by checking the gas-tightness of the well, installing the geothermal gravity heat pipe and checking the gas-tightness of the space between the pipes in the well. The mentioned underground works are carried out in accordance with the developed mining project.

The keynote speaker Dr. Aleksander Jevšek, Minister for Development and European Cohesion Policy, congratulated the project holder Drava Power Plants and all partners of the SI-Geo-Electricity project, who obtained funds from the Financial Mechanism of the European Economic Area at the public tender of the Environment programme, and emphasised: “I am glad that within the framework of the EEA Financial Mechanism we were able to provide funds for such an important project as the construction of the first geothermal power plant in Slovenia. The innovative pilot project can represent an important milestone for the generation of carbon-free geothermal energy by using abandoned gas and oil wells in Slovenia and throughout the world. It is also an exceptional development opportunity for the Pomurje region. I hope that the project will bring the desired results and that the geothermal potential of NE Slovenia will give a new development impetus to the economy of the Pomurje region and at the same time contribute to the decarbonisation and greater energy independence of Slovenia, which is especially important in these strained situations.”

Janez Magyar, Mayor of the Municipality of Lendava: “The activities within the project “SI-Geo-Electricity – Pilot geothermal power plant on an existing gas well Pg-8, pilot project” are a great opportunity for both Slovenia and the Municipality of Lendava. We started with procedures and activities for the use of geothermal energy in Lendava many years ago and used it in tourism, agriculture and district heating, and now the possibilities for obtaining electricity are also opening up. We want this pilot project to produce adequate results, and we are already planning other daring projects for the use of geothermal potential. In this financial perspective of the EU, there is a great emphasis on such areas, our task is to be brave in our approaches and activities, so that we can take advantage of the possibilities of easier exploitation of this potential. The Municipality of Lendava will be available as a partner to all those who want to find their own opportunity in this area. The greatest interest of the Municipality of Lendava is in the expansion of the district heating network to business entities/facilities and compact settlements in our municipality.”

The specifics of the Čentiba pilot geothermal power plant – rated power of 50 kW and annual production of 400 MWh of electricity – on the abandoned gas well Pg-8 are that it will use a geothermal gravity heat pipe, which enables a closed circuit of the technological medium. One dry well, approximately 30 centimetres in diameter, is required for the operation of the power plant.

On a global scale, it is a market niche in the field of electricity production from renewable sources. The pilot project will be the first application of this principle, which is the fruit of Slovenian knowledge. The implementation of the project represents a new step on the path of development and transition to a low-carbon society. This project is an added value for the local community, as well as for the whole of Slovenia. I am particularly happy that we have combined the knowledge, experience and interest of Slovenian companies with the support of the line ministries and the Municipality of Lendava.”

Štefan Hozjan, M.Sc., Managing Director of Petrol Geo said: “At Petrol Geo, we are proud to be part of the establishment of the first geothermal power plant in Slovenia. As a company, ten years ago we were already part of an important story – the installation of the first heating system with geothermal energy in Slovenia, here in Lendava. And we also continue this story of a green future with this project, which is gaining momentum today. Projects of this kind are important, especially now, when the energy crisis presents us with new challenges that we have not had to deal with until now. And one of the answers to such challenges is also the construction of a geothermal power plant in Slovenia, which will significantly help us to be as energy independent as possible. Of course, this type of project will also be an excellent starting point for all further projects involving wells. And we look forward to these developmental steps in our company because the company Petrol Geo is a development-oriented company which is committed to obtaining green energy from renewable energy sources through its operations. Our wish is that, just as the first well symbolically became the trigger for intensive industrial development in the wider Lendava region in 1943, the first geothermal power plant will also become the trigger for more intensive investment in the development and exploitation of geothermal energy in this area.”

Dr. Miloš Bavec, Director of the Geological Survey of Slovenia, stated: “By participating in the project, GeoZS follows its basic mission: to provide the best possible knowledge of the geological structure of the territory of the Republic of Slovenia and to transfer knowledge to all interested stakeholders for the efficient use of the Earth’s subsurface, taking into account the highest standards of environmental protection.

Previous research in north-eastern Slovenia confirms the extraordinary potential for obtaining geothermal heat using thermal water from a depth of up to about two kilometres. More than 200 deep wells have been drilled in the wider area for oil and gas research or the possibility of their storage, of which about a tenth can “produce” thermal water today. Some wells at depths of around three kilometres reach temperatures of up to 150 °C. The “deep geoprobe” technology, which will be used at Pg-8, does not affect the water balance of geothermal aquifers, but causes a change in the thermal field in the vicinity of the well. Therefore, we will use a local 3D geological and geothermal model to assess its capacity and long-term impact on the subsurface.

We are very pleased to be participating in the project, with which we will very soon confirm and quantify the geothermal potential of Slovenia for the production of geothermal electricity, using existing facilities. At the same time, we will try to facilitate new investment by developing legislative guidelines for the use of such innovative energy systems.

With this successful example, it is worth remembering that many parts of Slovenia at depths below a few hundred metres are still poorly or completely unexplored, therefore investment in new deep wells is very risky. Too many geothermal sources of heat or electricity remain undiscovered and thus we also cause economic damage to ourselves, as we do not use green energy that is easily accessible under our feet and is always available. Therefore, there is an urgent need to strengthen research to improve the knowledge of greater depths, at least in the most promising geothermal areas. Thus, in the near future, geothermal heating plants and power plants could be built not only on decades-old abandoned wells, but above all on new, technologically advanced wells that will optimally serve our needs for decades to come.”