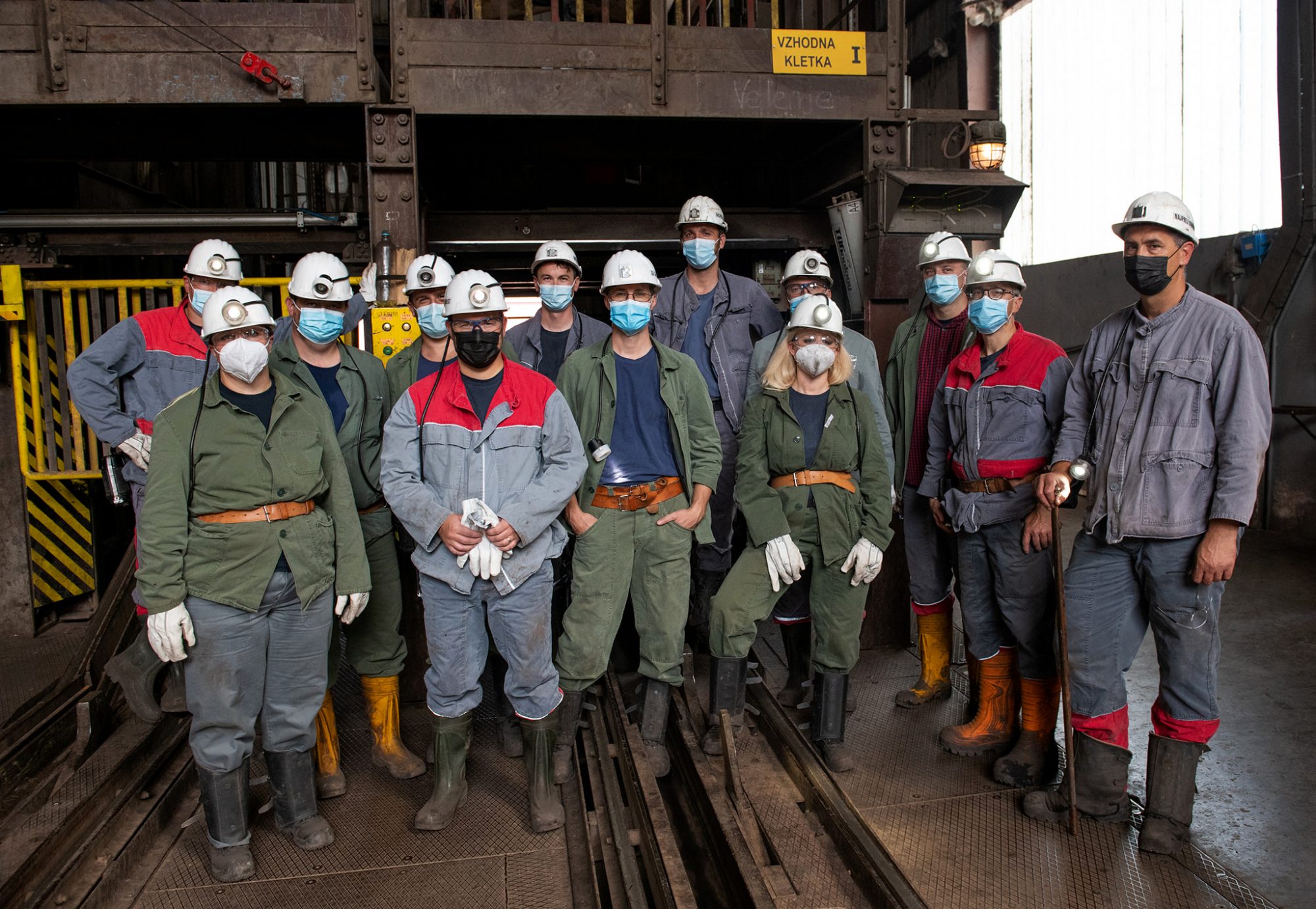 As part of a working visit on 13 September, the Minister of Infrastructure of the Republic of Slovenia Jernej Vrtovec and his team visited the coal mine operator Premogovnik Velenje (PV) and the Šoštanj Thermal Power Plant (TEŠ). With the management of Holding Slovenske Elektrarne (HSE), he inspected coal extraction work taking place almost 500 metres underground at point -110/B in the Pesje pit, which was launched last week, and was familiarised with the company’s financial and business restructuring plan. This was followed by a visit to the TEŠ and the 127-metre and 600-megawatt Generator 6, which is considered the most up-to-date thermal energy production unit in this part of Europe, and whose annual output represents almost a third of the total electricity production in the country. The minister’s visit concluded with a discussion in the Šoštanj Community Centre at which all key stakeholders in the future restructuring procedure answered questions related to the gradual phase-out of the extraction of coal and production of electricity from this resource.

“There is really a lot of know-how in the Šalek Valley, both in the TEŠ and PV, as well as extraordinary people who take part in the production of electricity every day. We will do everything in our power so that the people in the Šalek Valley are not left to their own devices after the closure of the mine. We will draw funds from three different sources. We are aware of the emerging problem and that it is financially conditioned. The fact is that the TEŠ last year generated a EUR 250 million loss and considering that the current prices of CO2 emission coupons are very high, and that they are only expected to grow further, we are pressed to take decisions at a very fast pace, which is something we discussed throughout the day with the managements of the energy companies and mayors. The relevant ministry proposes 2033 as the year of coal phase-out. This is an optimal year, by which we will be able to secure enough funds for restructuring. We want to present the government with a draft Act on the gradual closure of Premogovnik Velenje by the end of the year,” Minister of Infrastructure Jernej Vrtovec said at the discussion.

The strategy of the HSE Group, which today produces more than 65% of all electricity produced in Slovenia, is to remain the key pillar of the electricity supply in the country, despite the aspirations toward decarbonatisation, which demands deliberation regarding the gradual abandoning of the use of fossil fuels and, consequently, the gradual closure of Premogovnik Velenje and the TEŠ. In the near future, the group will face the challenges of optimisation of operation as a consequence of the negative trend of the value difference between the prices of electricity and CO2 emission coupons, while it is nevertheless necessary to ensure the safe and reliable operation both of the Velenje coal mine and the TEŠ and secure reliable production of electricity and thermal energy.

Efficient and coordinated phase-out of coal with growth of production from other sources will be of key importance for the decarbonisation of society, while maintaining appropriate reliability of electricity supply, said director general of HSE and TEŠ Viktor Vračar: “HSE has no influence on the prices of emission coupons. The options of the holding in this regard have been exhausted, as the current price of emission coupons is 2.3 times higher than the price of electricity. This means that TEŠ pays 2.3 times more for CO2 emission coupons than it pays to the coal mine for coal. To put it more vividly – for 100 million euros of annual payment to PV, TEŠ would have to pay another 230 million for CO2 coupons, which is, of course, financially unsustainable. It is our responsibility to start looking for solutions proactively. We have analysed possible forms of state aid with another 12 EU member states whose dependence on fossil fuels in the energy sector is higher than 20%. These include an Act on the gradual closure of Premogovnik Velenje, which could secure certain funds for this purpose. Another measure is capacity remuneration mechanism (CRM), which is planned in the new act on energy supply but needs to be justified before the European Commission. A third option is placing Slovenia in the international Modernisation Fund. There is practically no thermal power plant in Europe that could withstand such a coupon obligation on its own without operating in the red. These are certainly not those thermal power plants that have not yet been amortised and have obligations to borrowers.”

Regardless of the decision on the year of coal phase-out, an Act on the gradual closure of PV, which needs to ensure appropriate public sources of financing of the closure, environmental rehabilitation and social security of employees of PV and TEŠ, including for the entire period of maintenance of the coal mine after coal phase-out and an Act on restructuring of the Savinja-Šalek region, must be drafted as soon as possible, said the director general of PV Janez Rošer, adding that: “What needs to be taken into account in the discussion on ending the extraction of coal in the Šalek Valley are the technical parameters of the coal mine, the concept of extraction that enables optimal yield in the existing lignite site from the technical and economic aspects (this reduces the size of the pit and liquidation of pit facilities), and rehabilitation of the surface, which means that Premogovnik Velenje is not something that can be closed overnight. Today, around 50 kilometres of roadways are currently active in the mine, and around five kilometres of roadways are built and liquidated every year. The roadways built this year are the basis for production in the coming years. It is essential that we operate with long-term guidelines and pace of extraction, which means having the necessary quantities of coal over the coming years. This is the only way to appropriately optimise and streamline processes and resources. While production is being undertaken, the company needs appropriate and qualified staff. It is probably understandable that, given the negative connotation in the media, the interest in enrolment in the mining school is small, which will be one of the key challenges for us in the future. There is plenty of know-how in Premogovnik Velenje that has accumulated through decades of systematic and professional work. It is precisely that know-how and experience that helped develop a special excavation method in Velenje, while know-how and experience have also been the key advantage of the company, enabling it to achieve exceptional results in mining on a global scale.”

The trade unions of both companies are convinced that the government must draft an Act on the gradual closure of PV and determine financial sources for it, as well as find solutions for substitute jobs of equal status. The energy, social and environmental aspects that can cause adverse consequences need to be taken into account, they also noted at today’s discussion. However, they do not agree with 2033 being the year of coal phase-out.