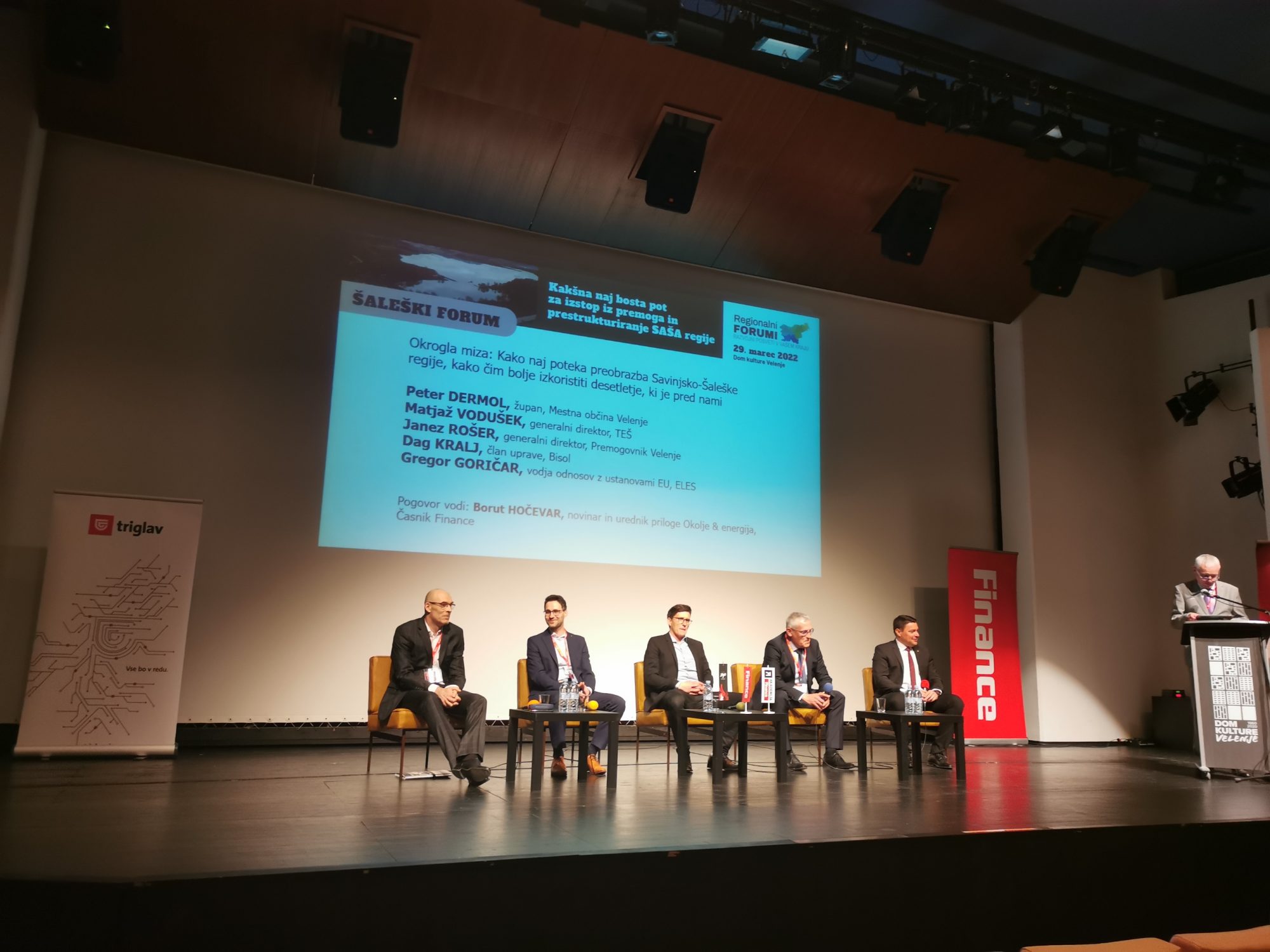 IN LIGHT OF THE GLOBAL ENERGY CRISIS, THE IMPORTANCE OF OWN ENERGY SOURCES AND SELF-SUFFICIENCY IS AGAIN IN THE SPOTLIGHT

Media centre / Press releases / IN LIGHT OF THE GLOBAL ENERGY CRISIS, THE IMPORTANCE OF OWN ENERGY SOURCES AND SELF-SUFFICIENCY IS AGAIN IN THE SPOTLIGHT

On Tuesday, March 29, in the Velenje Cultural Centre, the newspaper Finance hosted a regional forum on how the Savinja-Šalek region is preparing for a just transition and how the coal phase-out and restructuring of the region should look. In addition to representatives of experts and the Municipality of Velenje, the round table debate dealing with the planned restructuring of the Savinja-Šalek region and how to make the most of the decade ahead featured the Director General of the Velenje Coal Mine Janez Rošer and the Director General of the Šoštanj Thermal Power Plant Matjaž Vodušek.

Given the numerous initiatives to extend the operation of thermal power plants due to the energy crisis, and questions about whether the Velenje Coal Mine will be capable of mining coal even after 2033, if such a decision is made, the Director General of the Velenje Coal Mine Janez Rošer said: “Not so long ago, it was considered that coal would be mined in the Šalek Valley for about thirty years, and with the adoption of the national strategy for the coal phase-out, the year was set at 2033. It is necessary to produce various operating scenarios due to the numerous changes that have and will occur in the field of energy in the coming years and that indirectly or directly affect the operation of the Velenje Coal Mine. We have started to produce new operating scenarios for the Velenje Coal Mine on the basis of the guidelines of the EU strategies and Slovenia’s energy policy. The basis for all scenarios is the coal deposit in the Šalek Valley and the drafted study on the coal reserves of the Velenje Coal Mine, which confirms that at the end of 2021 the reserves amounted to more than 102 million tonnes, which suffices for normal operation for a few decades at the planned pace of extraction.

From a technical point of view, the Velenje Coal Mine will also be capable of extracting coal after the aforementioned year, provided that there is sufficient investment in equipment and employees in the coming years. We are talking about the technical capabilities of the pit to produce the required quantities. The Velenje Coal Mine is capable of extracting coal for many years to come, but if anyone thinks that the decision to extend the operation for another ten years could be taken only in 2033, they are very wrong. This decision must be taken in the period between 2025 and 2027 at the latest, which allows the construction of pit infrastructure for coal extraction after 2033.”

Matjaž Vodušek, the Director General of the Šoštanj Thermal Power Planj (TEŠ), added: “At this moment, when the whole world is actually facing an energy crisis, we are certainly all aware of how important the TEŠ really is, as it accounted for almost 40% of the total electricity production in Slovenia in the first two months of the year. Electricity production in Slovenia is currently very well secured. We can satisfy most of our needs ourselves, we are self-sufficient, and we have our own energy source – coal. Of course, we must follow the European directives that require the phase-out of fossil fuels. The TEŠ will continue to operate after 2033, using alternative fuels and new technologies. We are talking about restructuring the product portfolio by exploiting the extensive infrastructure and experience.”

The common thread of the forum was the national strategy for the coal phase-out that envisages 2033 as the year of the phase-out. The participants in the Šalek Forum also answered questions about what the national strategy means for the Šalek Valley, what the green transition will entail, what to do with the employees of the Šoštanj Thermal Power Plant and the Velenje Coal Mine, how Holding Slovenske Elektrarne will actively participate in drafting future projects related to the restructuring of the Savinja-Šalek coal region, and in which direction the region should be developed.