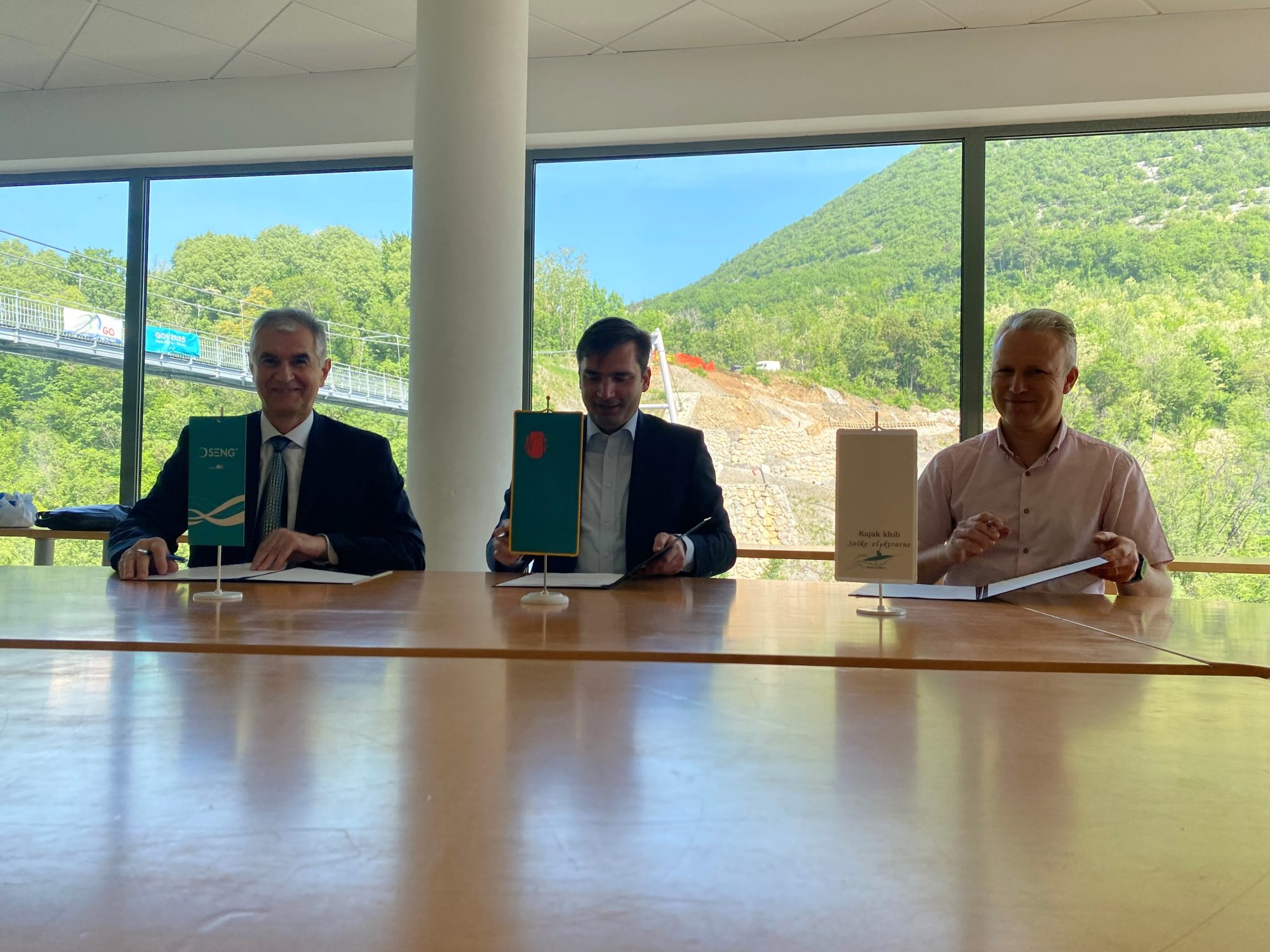 IMPORTANT AGREEMENT SIGNED TO INCREASE SAFETY FROM DROWNING IN THE SOČA

An important agreement was signed today on cooperation in the implementation of measures against the risk of drowning at the Old Dam location on the Soča near Solkan for 2022. The signatories, the Mayor of the Nova Gorica Urban Municipality, Klemen Miklavič, the director of Soške Elektrarne Nova Gorica (SENG), Radovan Jereb, and the president of the Soške Elektrarne Kayak Club (KKSE), Ivan Zagožen, assessed that cooperation between the local community, businesses and civil society is the only way to increase safety of visitors to this popular site. While there is no absolute safety from drowning, the signatories will make every effort to make the general public aware that the Soča is a torrential Alpine river, that the Old Dam location on the Soča is not an official bathing site and that visitors enter the river at their own risk.

“The Nova Gorica Urban Municipality has taken a very serious approach to finding ways to prevent accidents at the Old Dam location in Solkan and the number of warning signs has been increased. Bollards were added and a steel cable that marks the place where the very hazardous area begins was installed last year. An access ramp for lifeboats was also constructed. This year, signs that will specifically draw attention to the proximity of the facility of the Solkan Hydro Power Plant, which is especially important for visitors who are not familiar with the area. As a new feature, we announce presentations of the risks posed by white water rivers and the possibilities of safer swimming for school children. There is both an outdoor and an indoor swimming pool in Nova Gorica, which are constantly watched over by lifeguards. Together with our partners from KKSE and SENG, we will once again place special information staff along the Soča River, who will point guests upon arrival in the area to the ​​signs that clearly warn against the risks in this section of ​​the river. This measure proved to be useful last season and it was especially well received by visitors and tourists who are not familiar with the area. We will continue with this form of communication, which explains the risks in this area and how visitors can protect themselves from accidents,” said Mayor Klemen Miklavič

as the signing of the agreement, which is the second annual agreement of this kind. Last year’s agreement was fully implemented. SENG director Radovan Jereb said: “In accordance with the social responsibility policy of the company SENG and the HSE Group, the Nova Gorica Urban Municipality has been reimbursed all costs related to the installation of additional warning signs and the information staff in 2021 on the basis of the relevant annual agreement. In 2020, SENG also financed the setting up of colour markings in the Soča riverbed.”

Soške Elektrarne is part of the Holding Slovenske Elektrarne (HSE) Group, the largest producer of electricity in Slovenia. The signing of the agreement was also attended by Uroš Podobnik, the President of the Supervisory Board of SENG and a member of the Management Board of HSE, who noted that the HSE Group carefully nurtured cooperation with local environments in which its production units operated, while investing significant funds in responsible cooperation for the benefit of the local population. Proof of good cooperation with the Nova Gorica Urban Municipality is the joint effort for greater safety on the Soča and the agreement that was signed today.

The president of the Soške Elektrarne Kayak Club (KKSE) Ivan Zagožen is a member of the expert task force that has evaluated the measures taken last year and concluded that, because last summer on the Soča was not representative, as kayak competitions took place at the site for almost the whole of August, the measures will also be implemented on a trial basis this year. In line with the agreement, the kayak club will once again make sure that the information staff are present every day between 10 a.m. and 7 p.m. This is how Zagožen described the role of the information staff: “While the information staff, who are very familiar with the Old Dam location and the Soča in general, will significantly contribute to raising awareness of visitors about the risks that the river poses at this location, they do not have any powers or responsibilities in terms of maintaining order and peace, regulating traffic, directing visitors and/or rescue from water at the Old Dam location.”

As of 2021, warning pillars indicating the water level have been set up in the water at the Old Dam location near Solkan. There are also signs hung on a steel cable warning that swimming could be fatal and there are new, larger signs on the bank warning about the risk of drowning in Slovenian, Italian and English. A rescue platform and a ramp for lifeboats used by firemen have also been constructed.