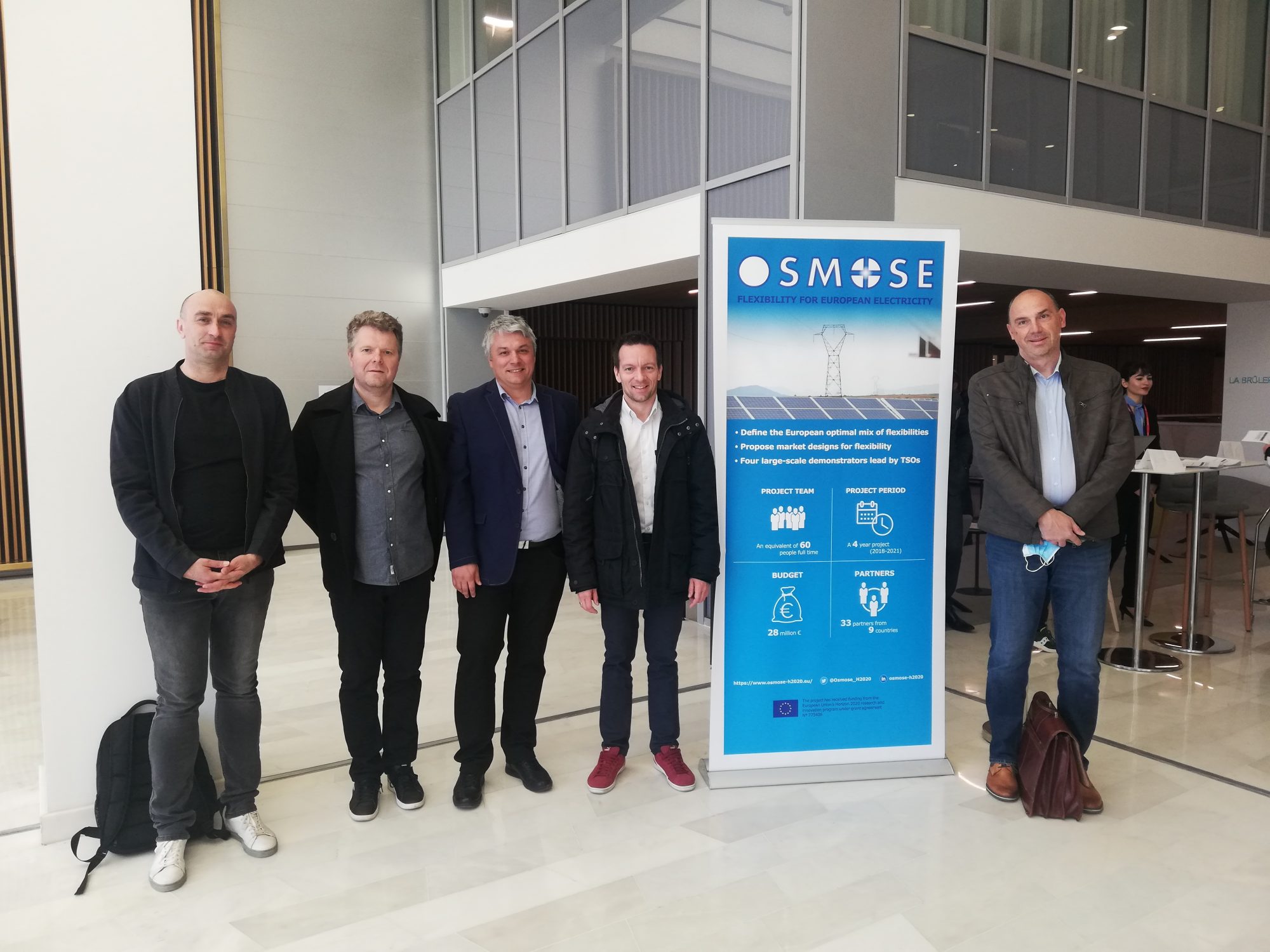 On 24 March 2022, in Paris, five employees of the HSE Group – Miran Kavrečič, Nenad Trkulja, Jernej Otič and Uroš Žibert, all from Holding Slovenske Elektrarne (HSE), and Milan Djokić of the company HSE Invest attended the final OSMOSE conference. It is a four-year project co-financed by the European Commission through the Horizon 2020 funding programme. Thirty-three partners from nine countries participate, and the value of the project is estimated at EUR 27.2 million. The demonstration group that included HSE investigated trading close to the moment of delivery. The demonstration focused on a pilot test of electricity trading close to the moment of delivery between the Italian and Slovenian markets. The experience gained through the OSMOSE project has proven to be a potential solution for the implementation of energy compensation for intermittent renewable sources, which can reduce deviations in real time.

First the basics: OSMOSE is acronym for Optimal System-Mix Of flexibility Solutions for European Electricity. The project applied for the call LCE-04-2017, which related to the Demonstration of system integration with smart transmission grid and storage technologies with increasing share of renewables).

The project on which we worked in Paris was organised into working groups. These addressed different scenarios of the development of the European electricity grid, deviations that occur in forecasts, market shapes and regulatory frameworks that would help to make better use of and provide more flexibility. The demonstrations were addressed by four working groups, which were tasked with overcoming the following challenges:

The first two challenges were technically oriented, the third was focused on system services, and the fourth on a new method of trading in flexibility close to the moment of delivery.

BETWEEN ITALY AND SLOVENIA

HSE was included in the fourth demonstration group, which studied trading close to the moment of delivery. In addition to HSE and ELES, which headed the group, it featured EKC from Serbia, RTE from France and FBK, HDE, ENEL, ENG and Terna from Italy. The group thus featured three electricity producers with conventional hydropower plants (ENEL, HDE and HSE), three system transmission network operators (ELES, RTE and Terna) and three research and development service companies (EKC, ENG and FBK). The demonstration focused on a pilot test of electricity trading close to the moment of delivery between the Italian and Slovenian markets. This border was chosen because it is commercially occupied (congested) most of the time.

The first platform covers network status data provided by RTE, Swissgrid, Terna and ELES. It created a topology from the data and extracted critical elements in the network. The second platform consists of several modules in the field of calculation, production and bidding

The third platform, the activation platform, activates the collected bids based on the network status. The calculation is performed every five minutes and runs on the infrastructure of the participating transmission system operator. The list of activations is imported into the SCADA environment of system operators, where the activation signal is then sent to flexibility providers.

The Proof of Concept, in which flexibility providers submitted their bids that were then successfully activated, was successfully implemented at the beginning of March 2022. This proved the concept that trading in such a manner, close to the moment of delivery, is possible, which can serve as a basis for further development of wholesale markets.

As part of the project, HSE developed a tool for calculating free flexibility close to the moment of delivery, for which the existing portfolio had to be well documented and examined first, and then described using linear programming techniques. The collected data was also used for the Production Optimisation project, and as a tool with which the results of external providers were validated. For the purposes of activation, some changes were made in control centres, which included changes in the HSE control centre and the DEM control centre. The experience gained through the OSMOSE project has proven to be a potential solution for the implementation of energy compensation for volatile renewable sources, which can reduce deviations in real time.

The project is not yet over – we need to produce one of the reports and hold a few webinars as part of the promotion.

Miran Kavrečič, head of the general analytics department of HSE and OSMOSE project manager in HSE