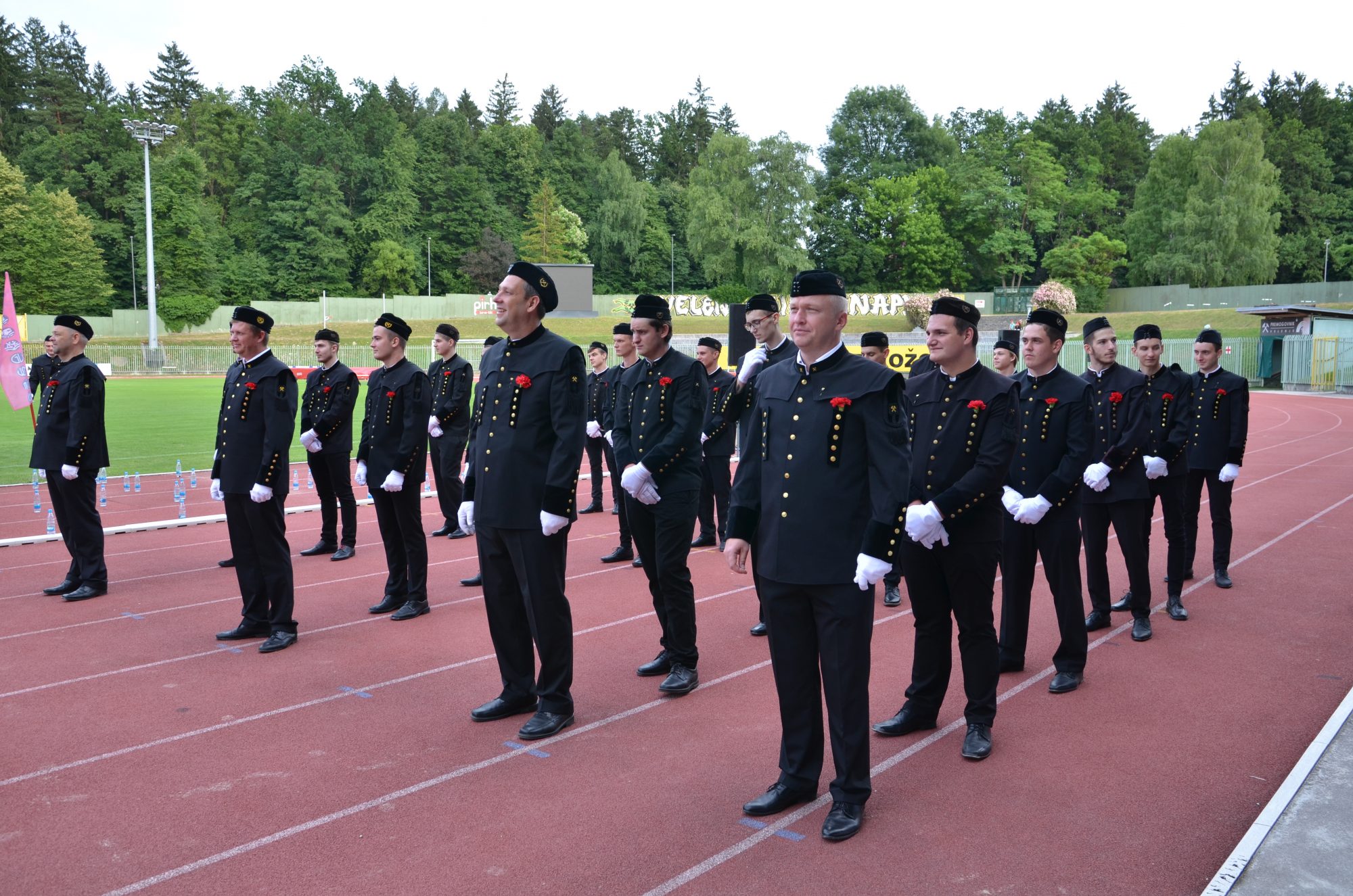 FOR THE JUBILEE 60th JUMP OVER THE SKIN, 42 NEWCOMERS WERE ADMITTED TO THE MINING COMMUNITY

Media centre / Press releases / FOR THE JUBILEE 60th JUMP OVER THE SKIN, 42 NEWCOMERS WERE ADMITTED TO THE MINING COMMUNITY

On Saturday, July 3, 2021, the 60th Jump Over the Skin took place at the Velenje City Stadium, an event which unfortunately could not be performed last year due to measures related to Covid-19. 42 newcomers were admitted to the mining community, and retired miners jumped over the skin again who did so for the first time sixty years ago, when the first Jump Over the Skin took place in Velenje. The honorary jump was performed by Albin Vrabič, Mr Sc, who has left a strong mark in the field of education due to his long-term commitment to providing quality education at all levels, for twenty years as director of the School of Mining and Environmental Protection at the Velenje School Centre.

The festive day began with the vigils of the Wind Orchestra of the Velenje Coal Mine. The commander of the parade led the proceedings with a mining stick dating from 1961, when the first Jump Over the Skin took place in Velenje.

To date, 3,825 newcomers, students of mining, mechanical and electrical engineering and, in recent years, mining and geotechnology engineers, too, have been admitted to the Velenje Coal Mine. On Saturday, July 3, another 42 newcomers were welcomed.

The General Manager of the Velenje Coal Mine, Janez Rošer, PhD,   said in his speech that this year was marked more than anything else by the search for the date when the Velenje Coal Mine will cease to be a working mine: “I hope that we will be able to listen to all stakeholders, especially those in the profession, and set goals that will be a win-win for everyone involved. Today, we do not yet have a clear answer as to when this will really happen. The state will continue to need energy and I believe that we will also obtain part of this requirement with the help of coal. I am convinced that we will be able to find the right answers to the challenges of the future. Furthermore, that we will be able to find and create other activities and jobs that will provide us with decent lives. Each of us builds and co-creates to the best of our ability, and we are especially successful when we stand together. That in 146 years of operation we have not sat idly by is also shown by the fact that the Velenje Coal Mine, in addition to coal mining, has throughout its history taken care of the rehabilitation of degraded areas with its own resources and without central budget funding. Both the Velenje Coal Mine and the Šoštanj Thermal Power Plant have carried out thorough ecological rehabilitation in the past, their impact on the environment has significantly decreased, and the Šaleška Valley is considered one of the cleanest areas in Slovenia, mainly due to district heating provided by Šoštanj Thermal Power Plant.”

Dr. Rošer emphasised that the Velenje Coal Mine follows the guidelines of the EU and Slovenia and supports the transition to a carbon-free society, while advocating the view that we must pursue realistic goals that will comply with the principles of fair transition. “We cannot close the coal mine overnight, but after the completion of the excavation we need at least another decade to be able to successfully rehabilitate the surface, liquidate the cave facilities and close the coal mine permanently. It is important that in the light of the forthcoming agreements, we redefine the strategy of the Coal Mine, prepare a set of projects that will represent the future at the energy location in the Šaleška Valley and determine the optimal scenario for coal mining going forward. We hope and wish that the decision-makers will take into account the technical and social aspects of the Velenje Coal Mine and its subsidiaries in addition to the environmental ones before the final confirmation of the year. Regardless of everything, the Act on the Gradual Closure of the Coal Mine must be prepared as soon as possible and must provide adequate sources of financing for the closure, environmental remediation, and social security of the Velenje Coal Mine and the Šoštanj Thermal Power Plant employees, and the SAŠA Region Restructuring Act. The Šaleška Valley is an important energy location where the local population is accustomed to living in harmony with energy. The Velenje Coal Mine, together with the Šoštanj Thermal Power Plant, affiliated companies of Holding Slovenske elektrarne, always ensured an uninterrupted and reliable supply of domestic electricity even during the worst epidemic. Despite the trends after the transition to a low carbon or a carbon-neutral society, which are evident both throughout the world and at home, it is still an important pillar of Slovenian energy. The inhabitants and the environment of the Šaleška Valley have therefore already paid a considerable price in the past due to the production of electricity, as the valley was heavily polluted. It would be unjust that, due to policies addressing global pollution, we would have to bear the burden of restructuring an industry that serves the whole of Slovenia, since as much as a third of electricity production takes place in this valley, and sometimes even half during dry periods.”

“We have a lot of technological knowledge and high value-added jobs in the valley, which demonstrates a great potential for new projects and new challenges. For more than ten years, the Coal Mine has been successfully applying for various European and Slovenian tenders for grants, which we have used for research purposes in the field of mining, technology, employee safety and education. We want to upgrade the existing level of development work and include as many employees as possible, especially new, young staff. As we see potential in the field of research and development projects in the future, we have obtained a certificate from the European Association for Certification and Accreditation, which means that we have qualified staff to manage European projects in the home country or any other country in the European Union,” added Dr. Rošer.

Albin Vrabič, Mr Sc, is an example of effective cooperation between education and the economy. As a teacher of professional mechanical engineering subjects, he recognised the importance of connecting education with industry, the economy and entrepreneurship. Together with the Velenje Coal Mine, he created programmes, curricula, textbooks, and the entirety of the practical education and training of students in the coal mining sector. He deserves credit for the introduction of the apprenticeship system, which has been an example of good practice in the Velenje Coal Mine for years but has only recently become established in Slovenia. His outstanding contribution is evidenced by numerous awards, such as the Šilih Award for special achievements in educational work, the award for efficient, high-quality and successful management of the Secondary Mechanical School, the Primus Award – Honorary Principal and Teacher Councillor and the Republic of Slovenia Lifetime Achievement Award in the field of secondary education, which he received last year.

His motto was: “Common sense tells us that energy should live in our Šaleška Valley until 2050, so we will continue to mine coal at the Velenje Coal Mine and produce electricity for the whole of Slovenia at the Šoštanj Thermal Power Plant!”. He wished good luck to everyone in attendance at the stadium, and especially to the young miners and their experienced comrades! 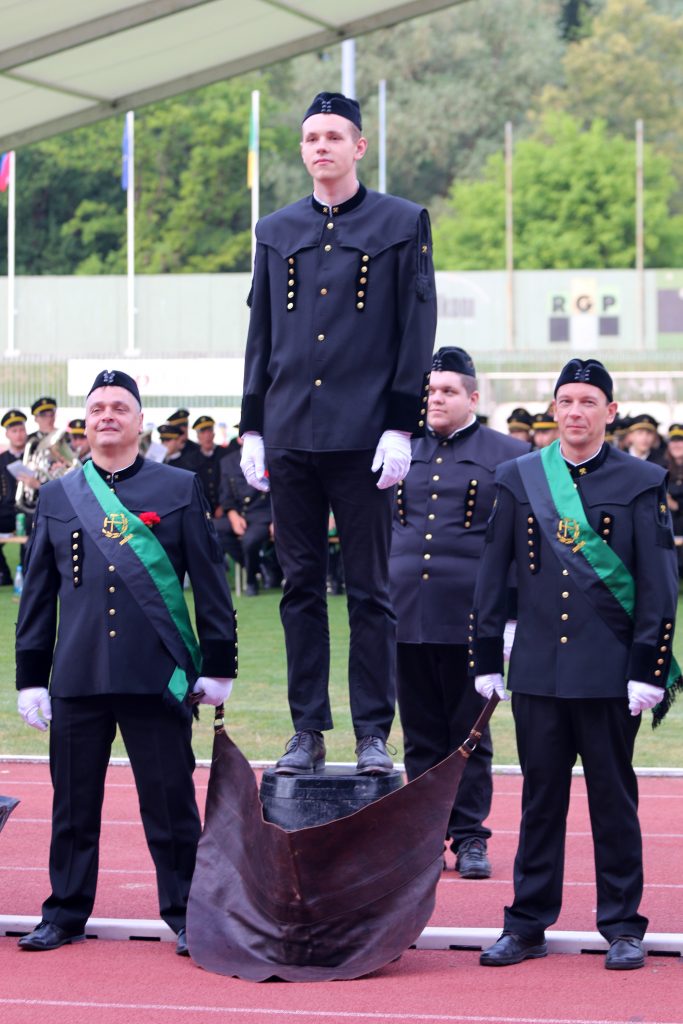 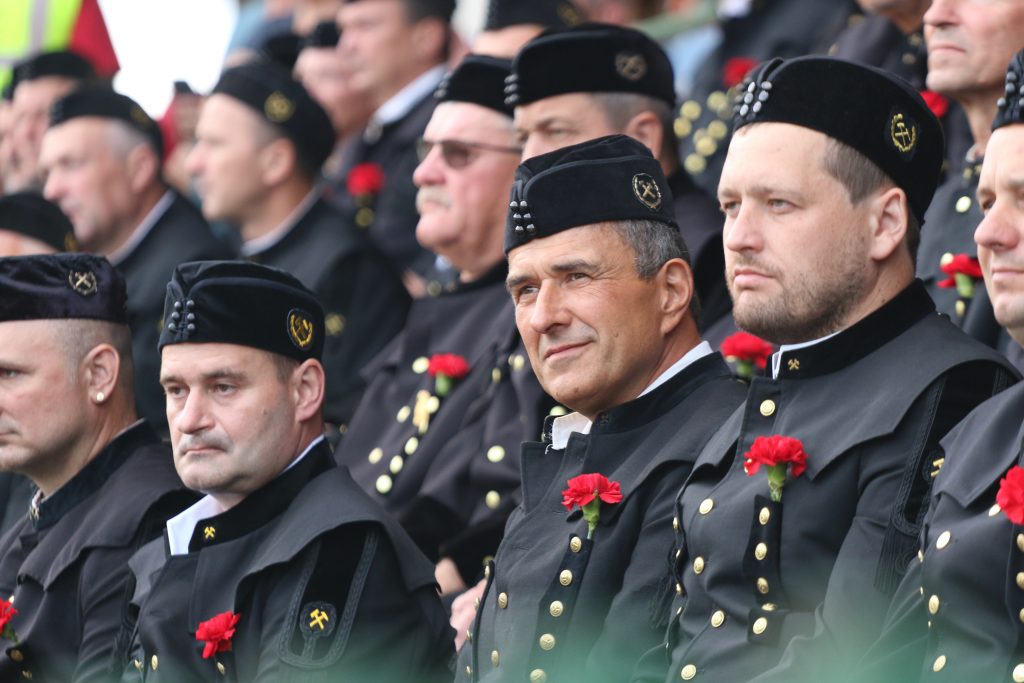 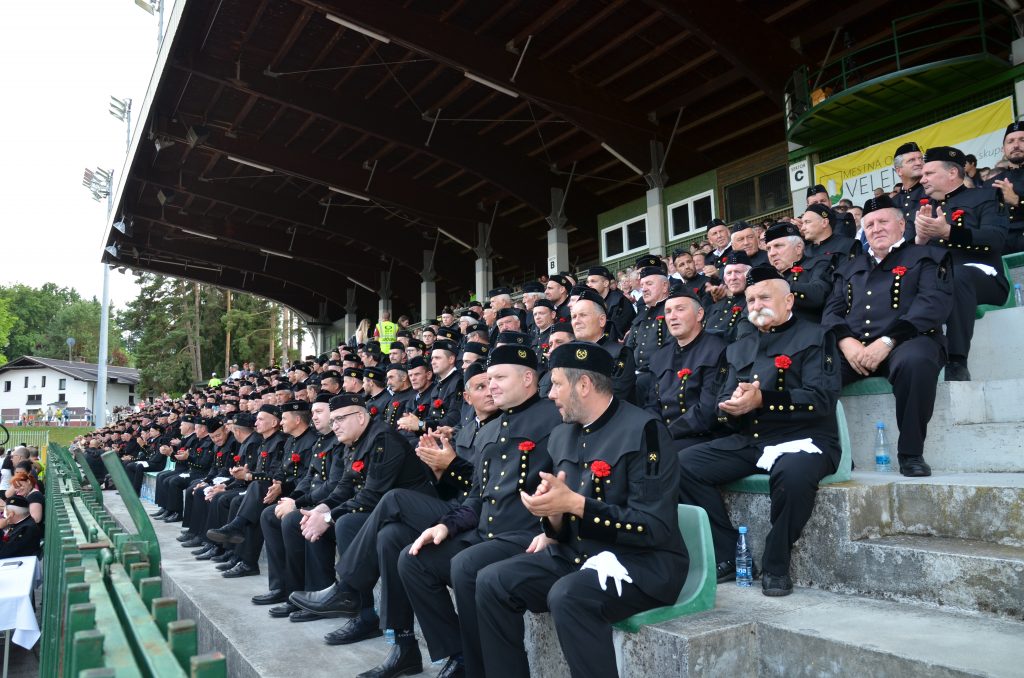 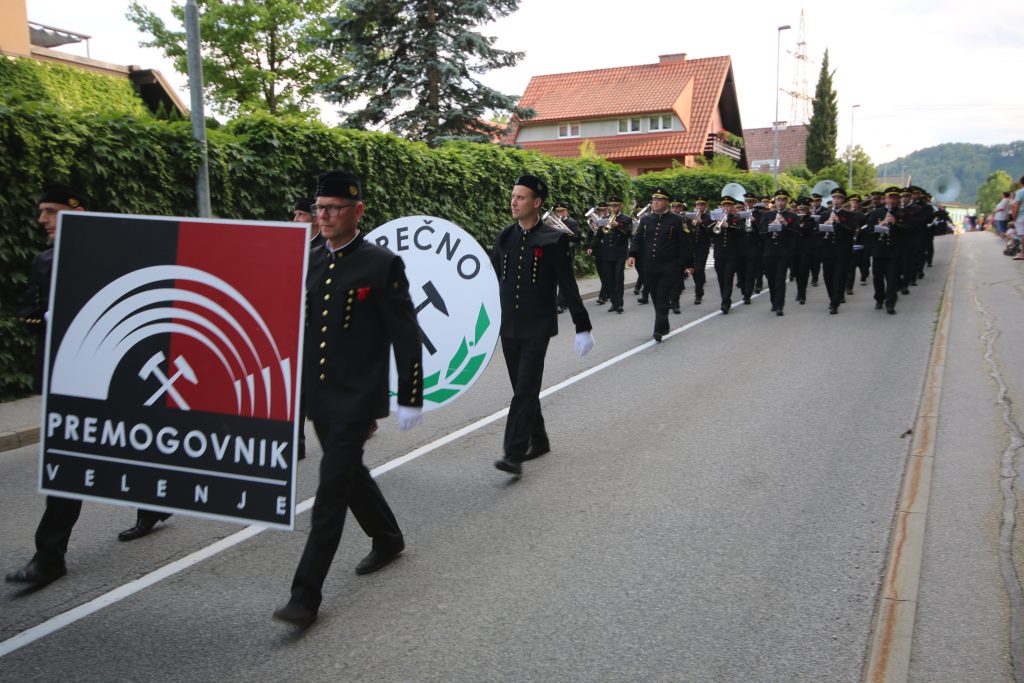 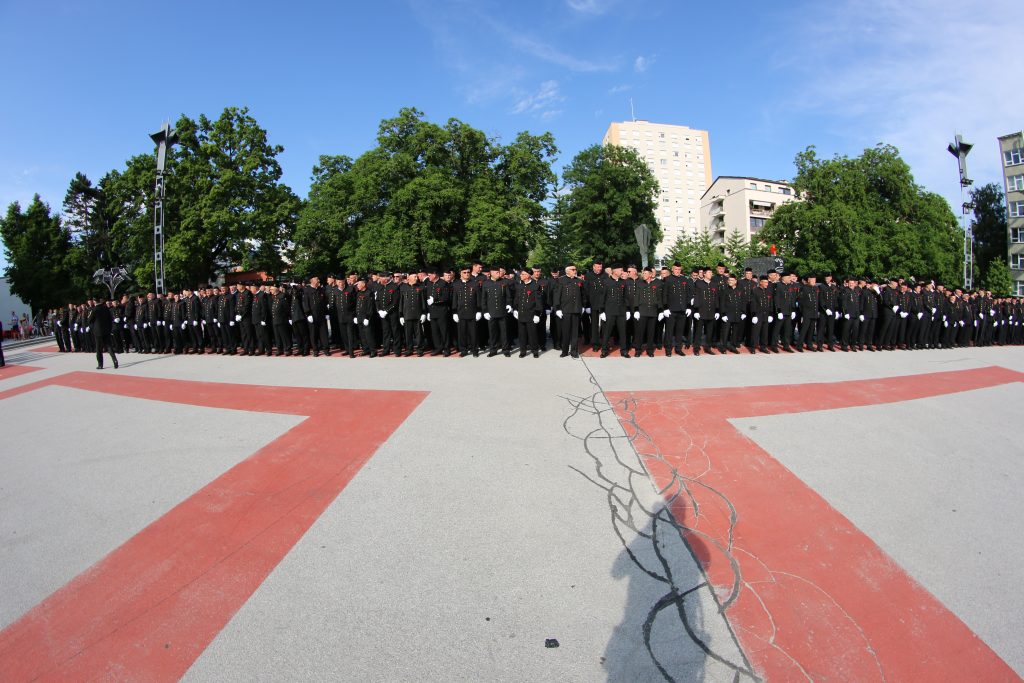