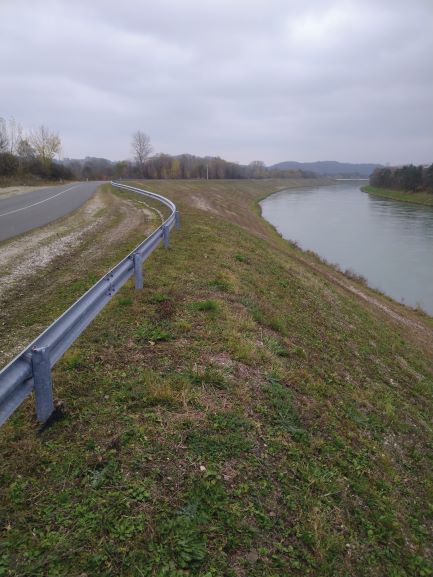 Company Dravske elektrarne Maribor, the largest producer of electricity from renewable sources, which operates as part of the HSE Group, will next week start the construction of the Zlatoličje solar power plant – segment five – on the left bank of the Zlatoličje hydroelectric power plant. In this way, the energy facility – the drainage channel – will gain additional value, and Slovenia will benefit from additional gigawatt hours of electricity from renewable sources.

Segment five of the Zlatoličje solar power plant will be located on the left bank of the drainage canal of the largest Slovenian hydroelectric power plant Zlatoličje – from the bridge over the canal to the karting track or racetrack Slovenja vas – a length of nine hundred and five metres. Nearly six thousand photovoltaic modules, with a total rated power of almost 2.7 MWp and a planned annual production of approximately 3,000 MWh, will adorn the otherwise untapped slope of the drainage channel. Given the slope of the terrain, which in some places exceeds 30o, the construction will be a considerable challenge and require caution from the contractor, the HTZ Velenje sheltered workshop, which is also part of the HSE Group. This is mainly due to the proximity of the canal, the water flow of which is up to 550 cubic metres per second. A special feature of the power plant will be the container design of the central inverter with a transformer station and a medium voltage switchgear. The cost of the project will be approximately two million euros.

Segment five of the Zlatoličje solar power plant, as the name suggests, is part of a larger emerging solar power plant with a total nominal capacity of about 30 MWp and an estimated annual production of 37,000 MWh, which will be built on the supply and discharge channels of Zlatoličje and Formin hydropower plants in the coming years. At the same time the company will, independently within the HSE Group and with external partners, also research other suitable locations for the installation of solar power plants.

The Prapretno solar power plant, in which Holding Slovenske elektrarne is the investor, is also under construction. Thus, it is expected that by the end of the year Slovenia will be richer in energy from renewable sources supplied by two solar power plants under the auspices of the HSE Group, which together will produce more than 6,000 MWh of electricity per year.

“With the construction of the first segment, the planned larger solar power plant, the company Dravske elektrarne Maribor and the HSE Group are following the state’s commitments to increase electricity production from renewable sources and the needs of households and the economy. We are convinced that it is important to use all the resources and knowledge available in Slovenia in an environmentally and socially acceptable way, thus enabling the country’s energy independence in the future as well,” said Andrej Tumpej, General Manager of Dravske elektrarne Maribor.

Dravske elektrarne Maribor, which operates eight large hydroelectric power plants on the Drava River, produced 2,018 GWh of electricity in the first seven months of this year, exceeding the planned output by 24 percent. Together with the other hydro companies of the HSE Group, 2,731 GWh of electricity from a water source had already been produced by the end of July, which is sufficient for the annual consumption of 650,000 or almost 80 percent of Slovenian households.

Segment Five of the Zlatoličje solar power plant with 2.5 MWp and annual electricity generation of 3,000 MWh is co-financed by the Republic of Slovenia and the European Union through the Cohesion Fund.