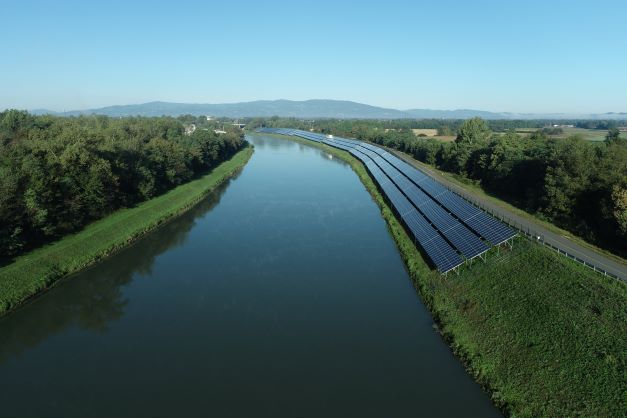 The company Drava Power Plants Maribor, the largest producer of electricity from renewable sources in Slovenia, in the presence of representatives of the Government – Bojan Kumer, M.Sc., the Minister of Infrastructure, the managements of HSE Group companies, business partners, colleagues and others present solemnly celebrated the seventy years of existence and officially launched segment five of the Zlatoličje Solar Power Plant.

The keynote speaker at the event, Bojan Kumer, M.Sc., the Minister of Infrastructure, at the opening of the new solar power plant emphasised: “The company Drava Power Plants Maribor is strengthening its production capacity and with its average annual production provides as much as 80 percent of Slovenian electricity from RES, which fills us with hope and pride that despite the time of crisis, we are still on a path that will help us achieve an efficient, reliable and flexible energy supply. This is especially important now, when we notice that due to increasingly extreme weather fluctuations, the amount of precipitation that would enable us to produce sufficient or more electricity has decreased. With increasing electrification and the pursuit of a green transition, it is therefore crucial that we continue to provide energy in accordance with the sustainable development of the environment and the electricity market.”

Viktor Vračar, Ph.D., Managing Director of HSE, said at the event: “The venerable jubilee that the Drava Power Plants Maribor are celebrating today is proof that tradition, knowledge and experience do not age. Seventy years of existence, twenty-one years in the HSE Group, have contributed to the safe and reliable supply of the Slovenian economy, industry and households with the cleanest energy – the energy of water, the Drava River. On this occasion, I sincerely congratulate all the employees who contributed their time, will and commitment to this. I believe that the next seventy years will be at least as successful as the seventy years thus far.”

In 1918, the Slovenian part of the Drava River was dammed for the first time – with the construction of the Fala Hydro Power Plant – and in 1978 for the last time – with the construction of the Formin Hydro Power Plant. In the intervening 1960s, in addition to the abovementioned two, six more large hydro power plants were built on the river. In the early years, the first power plants operated as independent business units. The idea of ​​merging the power plants on the Drava River at that time into a single company appeared for the first time in 1950; the official date of establishment of the company is October 1, 1951.

The Drava Power Plants Maribor have been part of the HSE Group since 2001. Two years after the establishment of the holding, the Government of the Republic of Slovenia issued a Decree on the concession for the use of the Drava River for the production of electricity, and on April 3, 2003, on the basis of this decree, it appointed the Drava Power Plants Maribor as the concessionaire.

Aleksander Brunčko, General Manager of DEM said: “Even though we are not the youngest after years of existence and operation, we are still full of energy and plans for the future. However, as the Drava River is used for energy, we are designing new projects for the use of other renewable resources for the production of electricity. We are aware of the commitments that the state has made for this, and we are aware of our responsibility, for current and future generations. Our goals are set high, but we believe they are achievable. Attuned to nature, the environment and people.”

The mission of the Drava Power Plants Maribor has remained the same for decades – safe and reliable production of electricity from renewable sources. Thus, in the first group of future projects we include those implemented at existing power plants, among which the renovation of the Markovci Dam and the reconstruction of the youngest hydro power plant on the Slovenian part of the Drava River – the Formin Hydro Power Plant – stand out. Other important projects include the rehabilitation of the vibration condition of the generators and the renovation of secondary systems. We enable the flow of the Drava River and the preservation of its energy potential by removing sediments, which in recent years, in cooperation with various institutions, have been upgraded into bricks suitable for construction, thus entering the circular economy in this area as well.

Among the important development projects of the company, it is necessary to point out the siting of ​​the largest Zlatoličje – Formin Solar Power Plant, with a total power of more than 30 MW, which will stand on the banks of the inlet and drainage channels of the Zlatoličje and Formin Hydro Power Plants and will, in addition to becoming the bigger sister of the segment that has just been built with a capacity of 2.5 MW and will produce electricity for almost 10,000 households, enable additional comprehensive utilisation of energy facilities intended for hydro production. The solarisation of Slovenia, which is planned by the state, allows us to hold talks with various local communities that have degraded areas that are ideal for setting up larger solar power plants. The above also presents us with the challenge of storing electricity. The company Drava Power Plants Maribor recently submitted an application for obtaining a building permit for the installation of a battery storage unit, which will be situated at the Maribor Island location. At the same time, we revived the project of the Kozjak pumped-storage hydro power plant, in which the availability of appropriate primary equipment, which could meet the requirements for the flexibility of the electrical energy services market, is being checked. A feasibility study of the project implementation is being prepared, in which all the necessary activities until the implementation of the project are addressed.

Among the strategic projects, it is important to mention the construction of three wind farms – Ojstrica WF, Rogatec WF and Paški Kozjak WF in the area of ​​north-eastern Slovenia, of which the Ojstrica WF project is the oldest, for which a few days ago we received an opinion from the Ministry of the Environment and Spatial Planning on the relevance of the environmental report for the national spatial plan of the abovementioned power plant, which enables the assessment of environmental impacts and can be publicly disclosed, which means a new important step on the way to the construction of the power plant.

We are also conducting research into the exploitation of the potential of geothermal energy for generating electricity, regarding which we already plan to implement a pilot project using a dry well this year, while potential locations for the installation of geothermal power plants of the binary system are still being studied.

Damjan Seme, M.Sc., Manager of DEM emphasised: “We are in a period of numerous, more specifically more than forty, major and minor investments that we plan to implement in the coming years. By 2026, with the construction of new production units, our goal is to increase the total power of the Drava Power Plants Maribor from the current 600 MW to 750 MW and thus significantly increase the proportion of electricity production from renewable sources at the national level. With the knowledge, experience and motivation of our employees, we are not afraid of the future, but look forward with enthusiasm.”

Segment Five of the Zlatoličje solar power plant with 2.5 MWp and annual electricity generation of 3,000 MWh is co-financed by the Republic of Slovenia and the European Union through the Cohesion Fund.