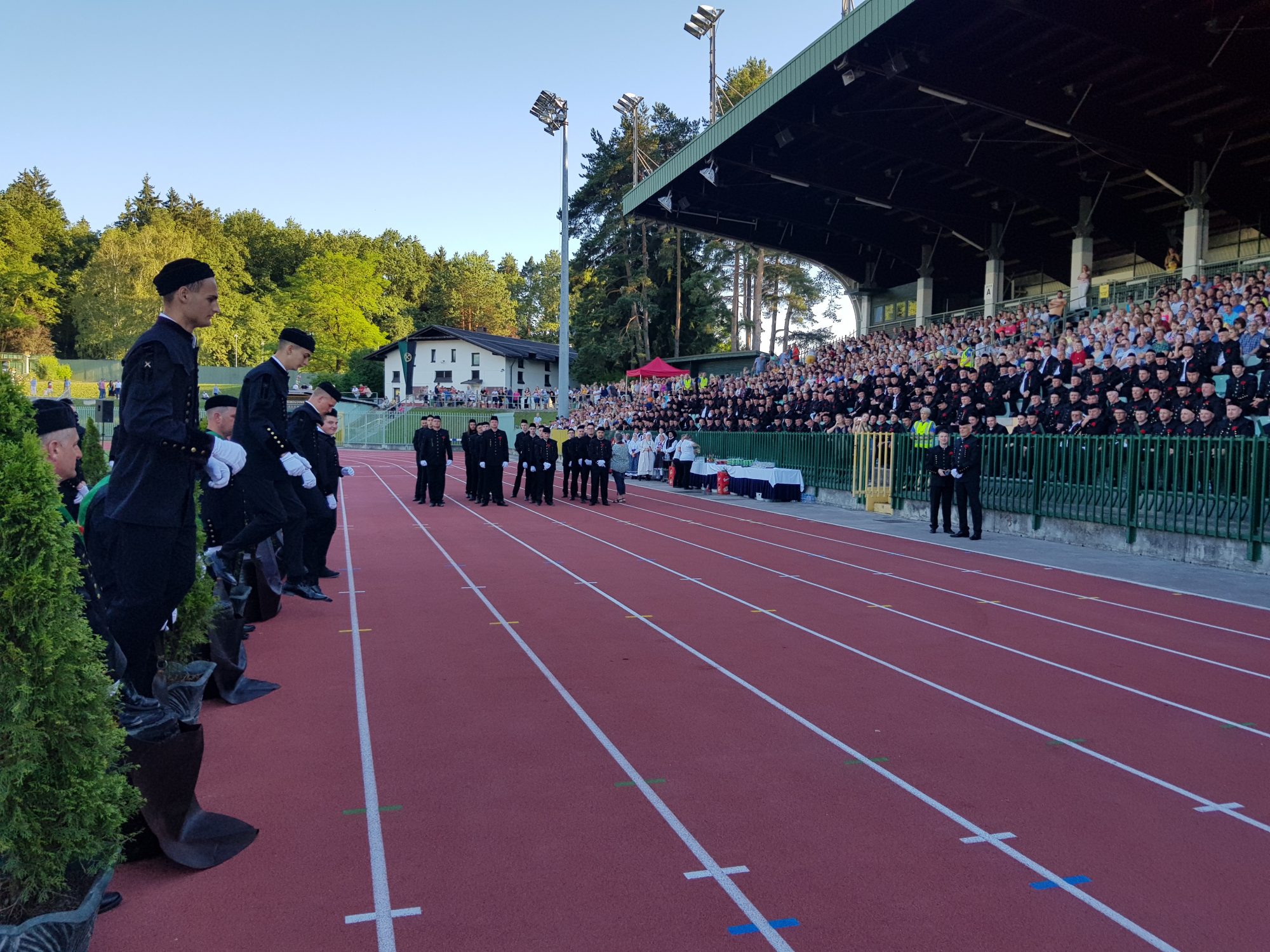 The Velenje Coal Mine, a related company of Holding Slovenske elektrarne and the only remaining operational coal mine in Slovenia, is an important and indispensable pillar of the Slovenian energy industry. Together with the Šoštanj Thermal Power Plant, it provided almost 40 percent of all electricity needs in Slovenia in the first months of the year. The Miners’ Day, which is not only a holiday for all of us who are directly connected to mining, but also a holiday for the entire Šalek Valley, was celebrated on Saturday, July 2, 2022, when the 61st Jump Over The Skin took place at the Velenje City Stadium. The honourable jump was performed by Franc Žerdin, D.Sc., mining expert and former manager of the Velenje Coal Mine.

“Being a miner is not just a profession. It is something more. It is tradition, connection, respect. Times are different than they were years ago, but with our joint efforts we are looking for new perspectives on our work and we are always setting ourselves new challenges,” said Janez Rošer, Ph.D., General Manager of the Velenje Coal Mine, addressing several thousand people.

147 years of coal mining are behind the Velenje Coal Mine. Throughout the years, it has been an important, even indispensable pillar of the Slovenian energy industry. “A lot of important activities have taken place for us in the last year. We will surely remember January 13 this year, when the Government of the Republic of Slovenia at the government session adopted the national strategy to phase out coal and restructure coal regions in line with the just transition principles. It stipulates that Slovenia will stop using coal for the production of electricity in 2033 at the latest,” pointed out Janez Rošer, Ph.D., adding that there was a lot of discussion about what the way out of coal and the restructuring of the region should be, but the common denominator of it all was that the path we take will certainly not be easy.

“Given the many initiatives to extend the operation of thermal power plants due to the energy crisis and the war in Ukraine, and in response to some statements in the media and press releases that there is insufficient lignite in the Šalek Valley, we point out that the study on the coal reserves of the Velenje Coal Mine confirms that reserves at the end of 2021 amounted to more than 102 million tons, and according to the predicted dynamics of mining, this is sufficient for normal operation for several more decades.

As to the question of whether the Velenje Coal Mine is capable of being mined even after 2033, if such a decision is made, we add that not long ago it was considered that we would mine coal in the Šalek Valley for another thirty years. However, with the adoption of the national strategy to phase out coal, this is set until 2033. We have started working on new scenarios for the operation of the Velenje Coal Mine based on the directions of EU strategies and Slovenia’s energy policy. The basis for the creation of all scenarios was the coal deposit in the Šalek Valley and the prepared study on the coal reserves of the Velenje Coal Mine, which confirms that THE STOCK IS SUFFICIENT.

From a technical point of view, the Velenje Coal Mine is capable of being mined even after the mentioned year, contingent, of course, upon sufficient investment being available in the coming years in both equipment and employees. Here, we are talking about the technical capabilities of the cave to produce the required quantities. The Velenje Coal Mine is capable of being mined for many more years, but if anyone thinks that we will only decide in 2033 that we can just extend the operation for another ten years, they are wrong. This decision must be taken within the next few years at the latest, thereby allowing for the creation of the necessary infrastructure for mining needs after 2033 in new mining areas. With coal, we will achieve the green transition more easily, because with it we will continue to ensure the stability and reliability of the Slovenian energy system and ensure that Slovenia is as self-sufficient and independent of imports as possible.”

To summarise briefly: there is enough coal for the next 30 years, but mining conditions have become more demanding over the years, which is reflected in the cost price. Despite various statements, we reiterate that there are enough coal reserves in the Šalek Valley. The only question is at what price, or what price is still acceptable.

To this day, the Velenje Coal Mine has welcomed 3,867 newcomers, secondary school students of mining, mechanical and electrical engineering to the mining community, as well as mining and geotechnology engineers in recent years. On Saturday, July 2, we added another 34.

Franc Žerdin, D.Sc. – justification for the honorary jumper and the motto

Franc Žerdin, D.Sc., was born on May 29, 1949, in Žižki. In 1969, he passed the mining exam at the Velenje Mining School Centre and in 1970 he graduated from the Mining Technical School. He graduated in mining in 1976 at the Faculty of Natural Sciences and Technology in Ljubljana, obtained his master’s degree in 1987, and defended his doctorate in 1993.

In the years from 1995 to 1997, he led a Slovenian-American group that studied the possibility of mining thick coal seams in Wyoming (USA) using the Velenje mining method and was the leader of projects designed to introduce this method in coal mines in Turkey, Serbia, Macedonia and Bosnia. It is to his credit that the Velenje Coal Mine was one of the first in Europe to receive the ISO 9001 and 14001 certificates.

In the years from 1975 to 2020, he was a member of many initiative and organisational committees, participated in many project groups, and led several of them. He is the author and co-author of over 60 professional and scientific articles in the field of mining and co-author of two scripts for students for the programming and optimisation of work processes in mining course.